ability on your website if you aren’t using https:

Now with the availability of Let’s Encrypt, a free service providing SSL Certificates, there really is no excuse not to switch over https://letsencrypt.org/

From today this website will support https: for all public pages and that’s working well. Behind the scenes there are various private pages and custom scripting that will continue to work as both http: and https: in the short term.

Why not just switch everything over?

Let’s Encrypt will only issue certificates for a publicly facing website, this has proved a bit of a difficulty in testing on backup systems without a public interface. Self issued certificates generate a variety of warnings and errors in most browsers resulting in final testing being done on a live system. The primary problem encountered was mixing our https: frame with an internal http: page, all of these links need to be altered so that the http: pages open in their own tab instead of in the frame as before.

For anyone with a relatively simple website, you should seriously look at using https:, we are seeing client sites gaining noticeably improved positions in search results after doing this.

Amid constant reports of security breaches exposing millions of usernames and passwords (https://haveibeenpwned.com/) are you changing your behaviour to make your online information safer?

The common wisdom today says you should have a different non trivial password for everywhere you log in. Strong Password Generator can help you there. But where do you store all these passwords, as you certainly can’t remember them all?

If you store them in a file, that file should be encrypted and exist somewhere that can be easily accessed or synced from all your devices. The options suggested in a recent Twitter exchange included: use a Dropbox file, on Macs use Keychain, or specialist software 1Password, Keepass and Msecure.

How about treating some passwords as disposable?

@gordon_j I’m on Mac OX, so I’ve got keychain. For sites with a fast new-password turnaround I often treat the password as disposable.

Whatever you do, the days of remembering trivial passwords are long gone and you should perhaps adopt one of the strategies mentioned. 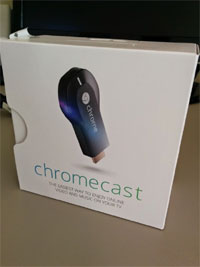 Having watched reports of Google’s Chromecast streaming dongle for the last 12 months or so, the idea of displaying what I can see on my PC on the TV screen is really appealing. There still seemed questions as to how well things really worked, but for the price I got one to try anyway.

The Chromecast is available for $US35 and locally for $AU49 (I bought mine from Dick Smith).

After un-boxing the dongle it connects to your TV HDMI port and to a USB port or power block for power. Initial setup is fairly simple and done using your WiFi network, from there your laptop Chrome browser shows a new icon which lets you cast your laptop browser tab on to the TV screen, that worked pretty well.

On all our mobile devices the YouTube apps support the Chromecast and make YouTube clips much more accessible, including those we’ve made ourselves that previously seemed a bit of waste.

File Browser apps on mobiles let you “cast” movies using your mobile device as a remote control. If you have movies as mp4 files life is simple, but there is plenty of online information to help get other formats working.

Overall it is a good gadget with a few quirks to get used to. Your phone and the Chromecast need to be on the same wifi network and if you move away from the network, when you return the Chromecast is not automatically detected. The only way we’ve found to find the Chromecast on a mobile device is to restart the router. Whatever the Chromecast does when it loses its network connection and restarts makes it visible to the mobiles again. (Simply rebooting the Chromecast itself doesn’t help at all.)

There are two WiFi routers on the network, one configured as an access point into the network over a EOP LAN connection. This is a Netgear WGT624 which the Chromecast connects through. To get anything to see the Chromecast connected to this segment requires the router to be rebooted and iPhones/iPads/Android/W7 PC will see it and work, sometimes after a couple of attempts. A cable connected laptop works just switching the TV on, but needs the router reboot to work via WiFi.

The primary router is a Billion BiPAC 7401VGP which has a wired W7  PC connected that sees the Chromecast with no problem all the time. Switch the TV on Chromecast is available on the desktop machine, connect the laptop via WiFi to this router and it too will see the Chromecast as the TV is switched on. The iPhone/Android phones connected to the segment don’t see the Chromecast.

Neither of these routers is on this list of routers known to work https://support.google.com/chromecast/table/3477832?hl=en-AU

The Netgear router has been on the replacement list for a while, so now the plan is to make sure its replacement is one from the “Known to work with Chromecast” list and see what happens then.

Comparing the “known to work” list with the devices MSY had available I replaced the old Netgear router with a new one and set it up as a WiFi access point. The Chromecast was reconfigured to connect to the new router and now everything just works. When the TV is switched on all of our mobile devices connected to the new router immediately see the Chromecast.

While the YouTube app is a favourite and mp4 movies work well, finding other apps with Chromecast support involves some searching around. With quite a library of mp3 music on the network it would be nice to find an app that played music well. Google’s own player wont play LAN files, some file browsers play the music but lack playlists and queuing etc.